Last week, on an ordinary sunny afternoon in March, we discovered some extra-ordinary new comedic talents, right here in Aston!

Friday saw the culmination of our Bridging the Divide project with our one-off comedy show ‘Jokes Apart’. Bridging the Divide is a community performing arts project which has used drama, comedy and dance to bring people together. With the support of the Big Lottery Fund and Women and Theatre, we  have brought the young and old and those from different communities and cultures together to help them understand one another, identify their similarities and differences and see how together they could affect change in their community. Through group and individual performances young people from The Firsbrook Centre (City of Birmingham Schools) and older people from our local community worked on performances to share their stories and thoughts through the show 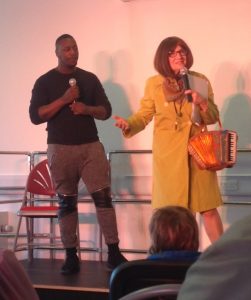 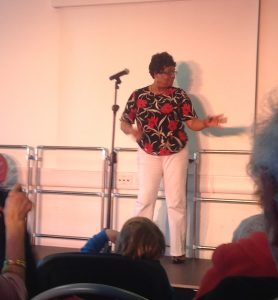 With a full house, ‘Jokes Apart’ took place last Friday, hosted by Mrs Barbara Nice with amazing performances from the community and a special guest appearance from local comedienne Annette Fagan.   The room was filled with laughter as, despite performance day nerves, one by one participants got up on stage and showed off their talents, even the teacher from Firsbrook revealed the hidden comedian within!

We would like to say a massive well done to everyone that took part and thank Women and Theatre for facilitating the sessions.

We look forward to helping bring the community together and reveal more hidden talents in our community in the future!

You can find out more about which cookies we are using or switch them off in settings.

This website uses cookies so that we can provide you with the best user experience possible. Cookie information is stored in your browser and performs functions such as recognising you when you return to our website and helping our team to understand which sections of the website you find most interesting and useful.

Strictly Necessary Cookie should be enabled at all times so that we can save your preferences for cookie settings.

If you disable this cookie, we will not be able to save your preferences. This means that every time you visit this website you will need to enable or disable cookies again.