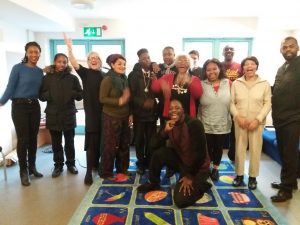 One of Birmingham’s oldest charities have brought members of the local community together in a comedy show called `Jokes Apart` which you can see for free on Friday 24 March at 1.30pm at their centre in Aston.

Through their ‘Bridging the Divide’ project, funded by the Big Lottery Fund, Birmingham Settlement, with the support of local theatre company Women & Theatre, have brought together people of all ages, from young people at school to members of their over 50s Ageing Well group.

‘Bridging the Divide’ focuses on bringing individuals and communities together to help them learn about one another – different cultures, beliefs and the issues they all face – with the goal of better understanding and supporting one another. 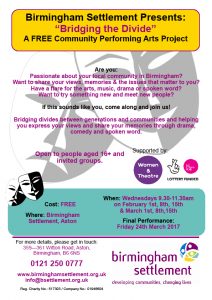 Aston is a very diverse community with many different cultures and faiths living side by side and the theatrical workshops which led to the creation of `Jokes Apart` celebrated these incredible differences, giving participants a chance to engage with new people and build a shared identity in their community.

The workshops used comedy as a centrepiece for discussions and those involved have had a fantastic time, sharing stories and anecdotes to create this final performance.   As well as helping to break down divides in the community, the project also helped to break down individual barriers, bringing the shy out of their shell and giving them a voice.

So if you want an afternoon of fun and laughter, why not come along to the final performance at 1.30pm on Friday 24th March?

The performance is free and will take place at Birmingham Settlement’s main hub in Aston at 359 – 361 Witton Road, Aston, B6 6NS.

Rob, Senior Community Action Work, said: “Our ‘Bridging the Divide’ project has gone a long way to overcoming the challenges and stigma facing the divided, disengaged communities of Aston and the neighbouring area. This performance is a culmination of the work which has seen the generations, from school children to our Ageing Well members, come together to create an exciting theatrical comedy performance that showcases their different lives, attitudes and backgrounds.”

You can find out more about which cookies we are using or switch them off in settings.

This website uses cookies so that we can provide you with the best user experience possible. Cookie information is stored in your browser and performs functions such as recognising you when you return to our website and helping our team to understand which sections of the website you find most interesting and useful.

Strictly Necessary Cookie should be enabled at all times so that we can save your preferences for cookie settings.

If you disable this cookie, we will not be able to save your preferences. This means that every time you visit this website you will need to enable or disable cookies again.